The Commodore's Daughter: A thrilling tale of choices 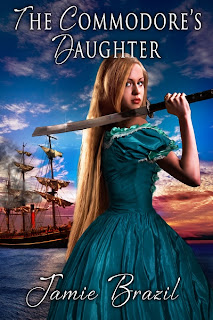 This book really boils down to choices. I choose to give it 4 out 5 stars, despite it being simple. I would say this is for younger teens 13-15. It was a beautiful story about a young girl, an American, who is about to be married off by her father to a man over twice her age, she's only 15. She is Commodore Perry's daughter, he is the commodore of the American Navy. She realizes she can not do this, even for the father she loves, and her friend Susan B. Anthony convinces her to run. She stows away on her father's ship. Before her father finds her, she is escaping into Japan, the country her father is supposed to open trade with.

However, Japan kills all foreigners. She is harbored by samurai.

Yeah, that's right: Samurai. That was a little confusing, but at least it is explained later. Keiko is a young girl her age, and she is the daughter of the head of the family, the head of that samurai clan. It's beautiful because the girls are mirror images of each other in their family dynamic, both have important fathers and both are enslaved to protocol. Her family is then killed by ninja's, or they attack trying to. I was starting to think this was one of my favorite childhood books Journey to Nowhere by Mary Jane Auch meets The Last Samurai. I couldn't stop imagining the ninja scene. They disguise her but are worried her blue eyes will give her away. 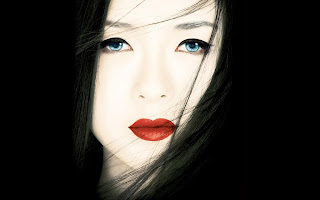 Okay..yeah..that's what I thought. She had blue eyes in Japan too. Now that actually really bothered me, but for the sake of the story I went along with it.

This is Jennifer's journey in the land where foreigners are killed instantly, and how she is hunted, with Keiko, a samurai by her side, Ryu a farmer with a hidden path, and in a village of those that are fated to die as she is, she must find a way to rescue her father from certain death in his negotations, learn to live by her own code, save the emperor from a Shogun who wants to take power, get Ryu's sister back from slavery, and save Keiko's family. So this is one action packed story where the main character grows, so I really like it. One of my favorite scenes reminded me of this

She can be so naive, and when she tried to be a geisha to sneak into the palace, it really came together in my head. I loved it. I defiantly recommend this book for younger teens.
Posted by Unknown at 12:03 PM